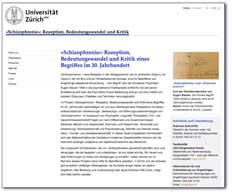 The term «schizophrenia» was introduced into medical discourse by the Zurich psychiatrist Eugen Bleuler in 1908. It quickly established itself scientifically and clinically, while also gaining influence in social contexts. Analyzing the reception, semantic shift, and critique of the term and its metaphorical uses provides insight into the relationship between semantics, medical theory and practice, and how this psychiatric concept has been employed in modern society’s self-perception.

Contents and aims of the research project

The interdisciplinary research project «Schizophrenia» examines the term from psychiatric, historic, linguistic, and cinematic perspectives as a potent concept between clinic and critique in the 20th and 21st centuries. This allows for a detailed description of the manifold meanings of the term schizophrenia, specifically

With our interdisciplinary approach, we examine the meaning and history of the term schizophrenia in varied social contexts. Our objective is to understand schizophrenia as a psychiatric, socio-cultural, and aesthetical model and to help destigmatize this medical disorder.