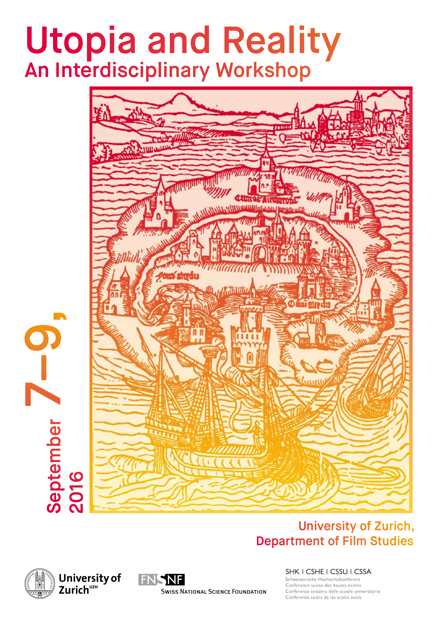 A workshop as part of the SNF project Alternative Worlds

500 years ago, Thomas More wrote Utopia, a critical, sharp-tongued and sometimes satirical sketch of a peaceful, egalitarian society. He invented a fictitious commonwealth that was directly related to the society he lived in. Since then, many utopias have been published that not only critically engaged with the social reality they originated in, but which often had an influence on that very society – be it in the form of political movements or intentional communities. Despite its fictional status, the literary utopia has thus always been a genre, which took its material from reality, and, at the same time, in a kind of loopback, interacted with it. The interdisciplinary workshop Utopia and Reality takes Utopia’s 500th birthday as an opportunity to take a closer look at this dynamic.

The workshop, which is part of the research project “Alternative Worlds. The Political-Activist Documentary Film” (supported by the Swiss National Science Foundation), approaches the phenomenon of utopia from two very distinct directions. On the one hand, we focus on literary utopias and the associated political and philosophical concepts. On the other hand, our interest lies in activist documentaries and their socio-political implications. Both forms are defined by a peculiar oscillation between fictionality and factuality; both create worlds which, ideally, initiate critical thinking and even political action on the part of the reader/viewer.

By combining these two approaches, new and intriguing questions arise. Our main concern is the characteristics of both literary and filmic utopias and the way they function at the intersection of fiction and nonfiction. The workshop will concentrate especially on the power of documentary films and their potential to go beyond a mere (re)presentation of reality and instead to present images of possible futures – images that can, in turn, raise the political consciousness and sometimes even ignite political action. Going further, the question arises of whether the concept of utopia has to be detached from the literary genre and to be broadened, so that it can be understood as an anthropological – though still mutable – concept, as a hopeful striving in the Blochian sense.